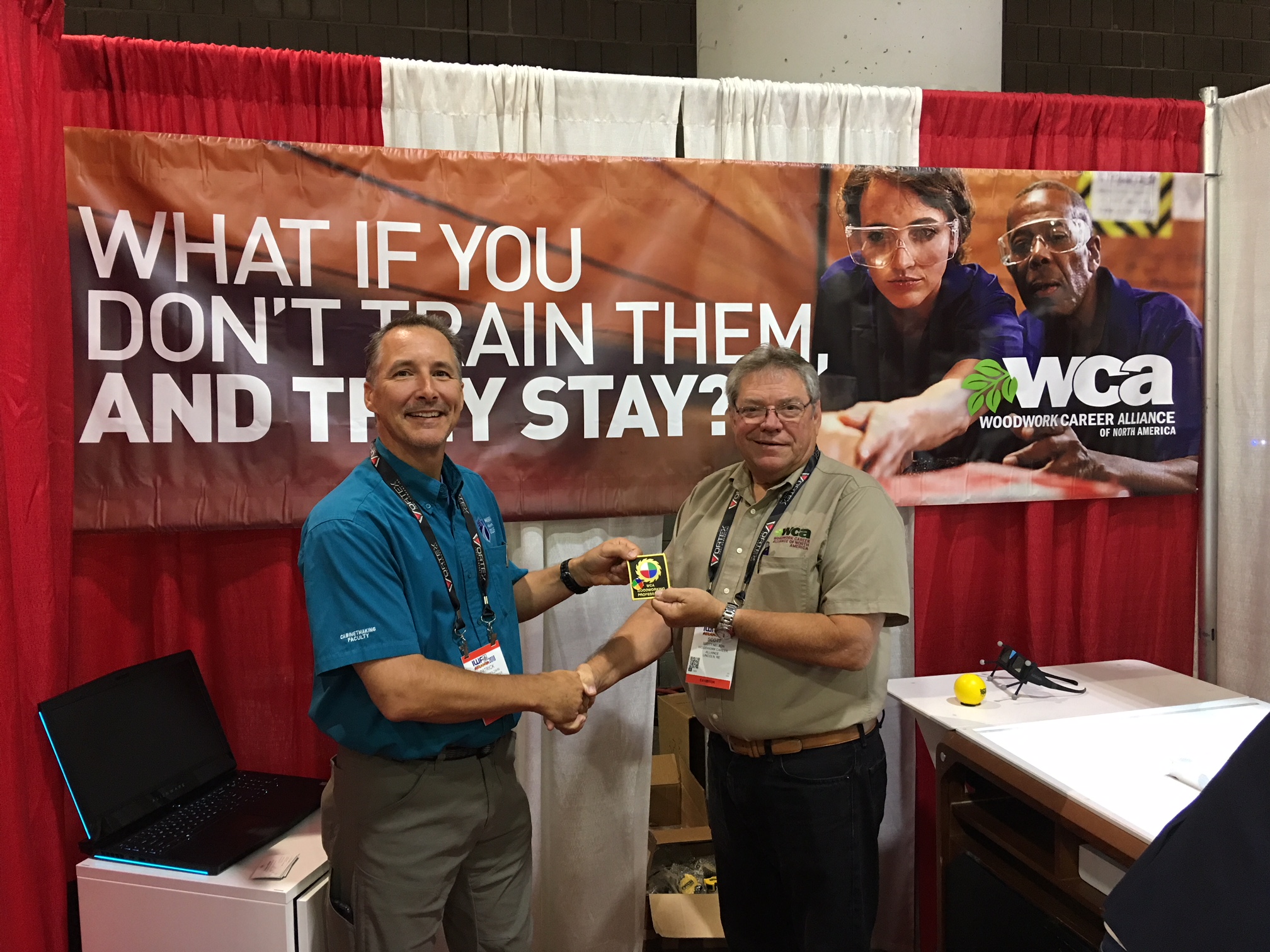 NELLYSFORD, VA – The International Woodworking Fair, held Aug 22-25 in Atlanta, provided the Woodwork Career Alliance of North America with much cause to celebrate.

For starters, Patrick Molzahn, woodworking instructor at Madison College in Madison, WI, received the first Diamond credential ever issued in a ceremony held at WCA’s booth. In addition, the WCA was the beneficiary of a pair of fundraising activities coordinated by IWF, including a new silent auction. Approximately $8,500 was raised for the non-profit organization dedicated to developing and growing a skilled woodworking workforce.

Molzahn, a founding member of the WCA’s Board of Directors, said the experience of achieving the Diamond credential fulfilled a long-term goal. “I use the WCA credentialing system to evaluate and reward my students,” Molzahn said. “I have long felt the need to test the efficacy of our credentialing system by experiencing it from the candidate’s perspective.”

In addition to passing more than 125 skill evaluations on dozens of machines and tools, Molzahn completed projects for the three highest credentialing levels: Red, Gold, and ultimately Diamond. For his Red credential, Molzahn built a 32mm cabinet, a design he uses with his students. For Gold, he built a maple face-frame cabinet with a raised panel door. Molzahn described the Diamond project, recreating six replacement windows and an entry door for a National Historic Landmark, as “the hardest I have undertaken in my career.” The project was featured in AWI’s Design Solutions magazine.

Having successfully progressed through all stages of the WCA credentialing Passport program, Molzahn said he is confident that the WCA standards can be used effectively to measure a candidate’s woodworking abilities. “For industry, the WCA credentialing system provides a template for recognizing and rewarding one’s skills. Moreover, employers can use the credentialing ladder to develop their talent and encourage continuing education.”

Industry Shows Strong Support IWF once again provided attendees an opportunity to financially support the WCA during the registration process. About 600 woodworking professionals generously checked off a box to donate $5 to the WCA.

IWF also designated WCA as the beneficiary of the silent auction of sports memorabilia and other collectables and valuable merchandise. The auction, presented by Expo Auctions of Sugar Hill, GA, raised nearly $5,500 for the WCA.

“I want to thank IWF for designating the WCA as the recipient of the silent auction and registration fundraisers for this year’s show,” said Scott Nelson, president of the WCA. “These contributions are extremely important to WCA and provide us with additional funds to support school woodshop programs and candidates to become credentialed woodworkers.”

Based on the tremendous success of the silent auction at IWF, plans are already in the works to organize a similar event at the AWFS Fair, July 17-20, 2019 in Las Vegas.