What’s the state of the panel processing industry in North America?

John Aufderhaar believes it’s good and getting better, and he should know.

“The quantum leap that the industry has made in the last three to five years has been amazing,” Aufderhaar said during a recent interview at his office in Watertown, Wisconsin. “I don’t want to say I’m an omniscient observer, but we have an opportunity in this business to get a real sense of the big picture, from forest to finished product, and the improvements and growth have been nothing short of dramatic.”

Aufderhaar’s business is producing Surface & Panel, which focuses on panel processing like no other publication, and his role as publisher gives him a special perspective on the entire industry as reflected in his magazine’s pages. His interest in and knowledge of panel processing, however, have roots that go back 40 years to when he first started in the furniture business.

Aufderhaar worked in engineering and product development before eventually becoming quality control director. Even though the company specialized in upholstered furniture with hardwood frames, he had brushes with panel-processed products, and his interest was piqued. He especially remembers a fact-finding trip to an up-and-coming manufacturer in Tupelo, Mississippi, and a tobacco-spitting owner who showed him how much money could be saved—while still making solid, durable furniture—by mass producing the frames with plywood.

“Your hardwood frames are a work of art, but no one can see it, and few consumers care,” the man told Aufderhaar. “You have a massive rough end and hundreds of thousands of board feet of hardwood in the yard. We bring in 4-x-8-foot sheets of plywood, nest all of our parts for efficiency and then cut four sheets deep. There is no way you can compete with us on cost. The same holds true in cut and sew … We cut fabric 30 deep because we only offer 10 styles … copied from your best sellers.”

Aufderhaar was impressed by the quality and consistency of plywood, and he was convinced that he’d caught a glimpse of the future. He also was taken by the efficiency of the CNC routers and the nesting software, which allowed the company to use a high percentage of the sheet.

“I realized then that plywood and composite panels were the answer and that panel processing was the key to becoming a successful woodworking company,” he said. “When you can make a consistent panel, now you can create technology and machines that can process it consistently and accurately. The more consistent you make the raw material, the more accurate your machine can be. With lumber, you can’t do that.”

Aufderhaar moved on from the furniture company to sell high-end point-of-purchase displays that often featured panel products in their construction. He got into magazines when he became a salesman and ultimately publisher of Wood Digest in the mid-1980s. Solid wood still dominated furniture and casegoods, but panel processing was emerging, and Wood Digest began to reflect the change. Aufderhaar conceived and launched Laminating, Design & Technology magazine to document the growing importance of surface materials and the inseparable connection to composite panels.

In 2003, he put his money where his heart was and launched Surface & Panel to cover panel processing with a focus on materials, technology and design. “I had an affinity for it,” he said of the panel business, “and to me, it was very clear that that’s the way the world was going. From a styling standpoint, even though the materials didn’t have the beauty and fidelity and textures that they have now, you could still see that this is where things were headed.”

Aufderhaar always was sure that panel-processed goods would be accepted by greater numbers in North America, but the improvements of the last three years and consumer reaction to them have buoyed his confidence.

“What’s really caused the industry to explode, and there is no looking back from it, is that surfaced composites are amazingly realistic. The fidelity of the print along with the textures and finishes are so good, the consumer does not know that it is laminate. If they love the look, understand the performance, they’re sold.” (See TFL, HPL, 3DL and Foils, page XX.)

While many changes and developments are behind the industry’s success, Aufderhaar cites “attention to detail” from décor printers as a key factor in the surge of more attractive and realistic surfaces and greater acceptance of panel product(s in North America.

“They are the ones that have to develop the surface materials, so creativity and innovations by décor printers aided by better scanning capabilities and enhanced printing technology have made huge differences,” he said. “Those things, in conjunction with the incredible work of the plate makers, who are artists in their own right, are largely responsible for the industry’s amazing growth.”

Cutting across all surfaces 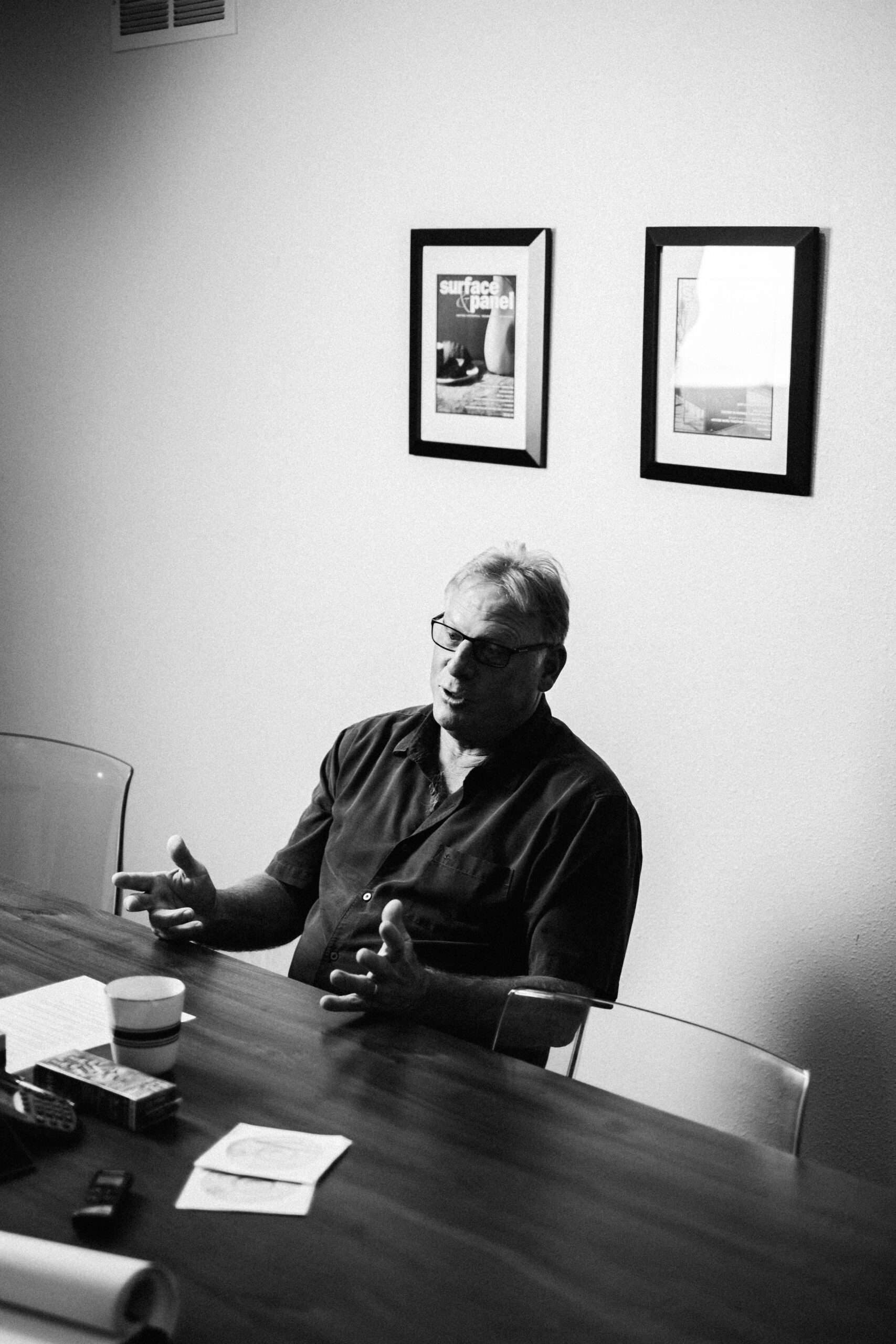 The improvements cut across all surfaces, including low-basis weight paper, finish foils, TFL, HDL, 3DL and others, meaning a wider array of consumers have access to them.

If any aspect of finished products has kept up with surfaces in terms of innovation, it’s hardware, almost to the point where it’s become the star of the show. (See Hardware, page XX.)

“Hardware is critical because it has become so amazingly functional. It’s become a huge selling point,” Aufderhaar said.

While people used to care only about whether the hinges and slides worked, that’s now expected, and new features have taken cabinet doors and drawers to a new level. “People walk up to a cabinet now, and it opens vertically, and they are ‘Wow, that’s neat.’ It’s all about function, accessibility and ergonomics. And it’s all integrated.

“Some people would say that the box and the cabinet is just a carrier for the coolest stuff, which is the hardware,” Aufderhaar said.

Companies now tout their matching programs to help sell different products for different uses in projects—HPL for horizontal surfaces, TFL for vertical—and technology has helped make the differences imperceptible. Plus, there is more integration among companies that are cooperating in strategic ways, Aufderhaar said.

“In the past, HPL guys didn’t want TFL to succeed. They saw it as a threat. Now, they embrace it. They know that either they are going to work with the other company or someone else will. Or they are doing it all themselves.”

“There is a fantastic story to tell because you are really using waste,” he said, referring to the sawdust and shavings used to produce composite panels. “I think the millennials and other young people today are far more in tune with products with a great environmental story.”

More education is needed, however, in showing people that forests are among the most renewable resources on the planet, Aufderhaar said, noting that North America has more trees today than it did in 1900.

Also on the environmental front, the Composite Panel Association and companies in the panel processing industry deserve credit for taking a voluntary, pro-active approach to making sure their resin systems were CARB compliant with formaldehyde emissions and for working with the government to establish new standards to ensure consumer safety, Aufderhaar said. (See Jackson Morrill’s column, page XX.)

Societal changes have also played a role in the increase in the use of panel-processed goods. Beyond younger people accepting products that aren’t solid wood, the trend toward smaller living spaces favors flat products and built-ins that are made most efficiently with panels. Millennials are also buying recreational vehicles in greater numbers, and many of today’s RVs feature processed panels because of their look, function and light weight.

Technology and automation have boosted the North American panel business by leveling the playing field with the rest of the world, Aufderhaar said. (See Software, Processing Technology and Tooling, pages XX, XX and XX.)

“You can go into a panel processing facility in Keokuk, Iowa, or Shanghai, China, and they can look alike because they are all doing the same kinds of things … The technology is the same, and they are all buying from the technology leaders. But with transportation costs and the importance of speed to market and the variability of products, you need the ability to change and customize because that’s what the customer wants.”

Labor costs have become less of a factor because of automation, and that’s a huge benefit for North American manufacturers, he noted.