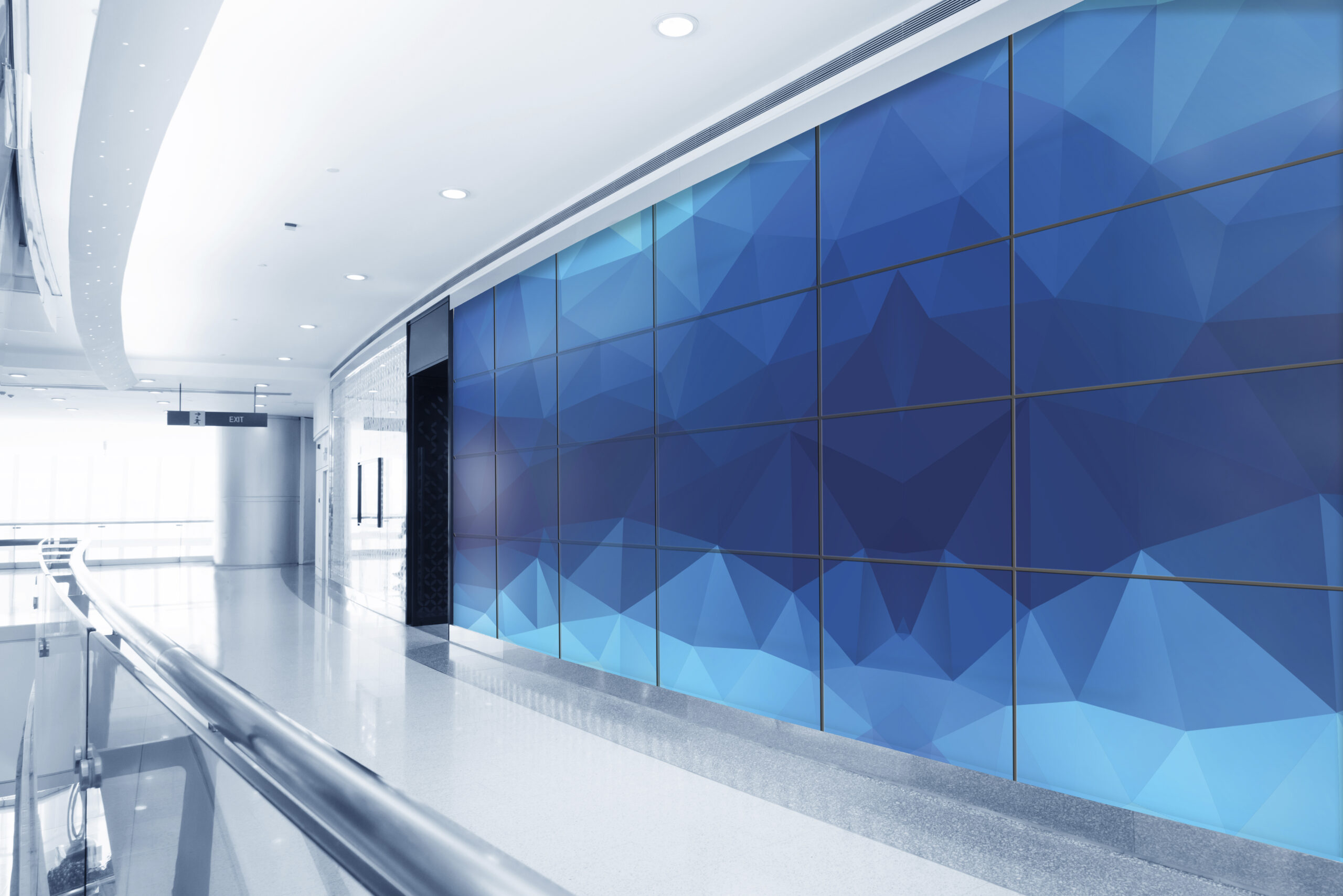 As its name implies, BlueSky allows Marlite to offer an almost limitless range of custom pre-finished panels for retail, healthcare, institutional and other end-use markets.

Whereas only a year ago, Marlite customers were bound to three dozen or so standard colors, they can now choose from the full Sherwin-Williams palette numbering more than 7,000. In addition to the expansive selection of solid color finishes, the hybrid BlueSky system incorporates a state-of-the-art digital printer for replicating photos, scanned images and patterns onto high-density fiberboard (HDF), fiberglass reinforced plastic (FRP) and other flat substrates used for wall panels, ceilings and other interior applications. 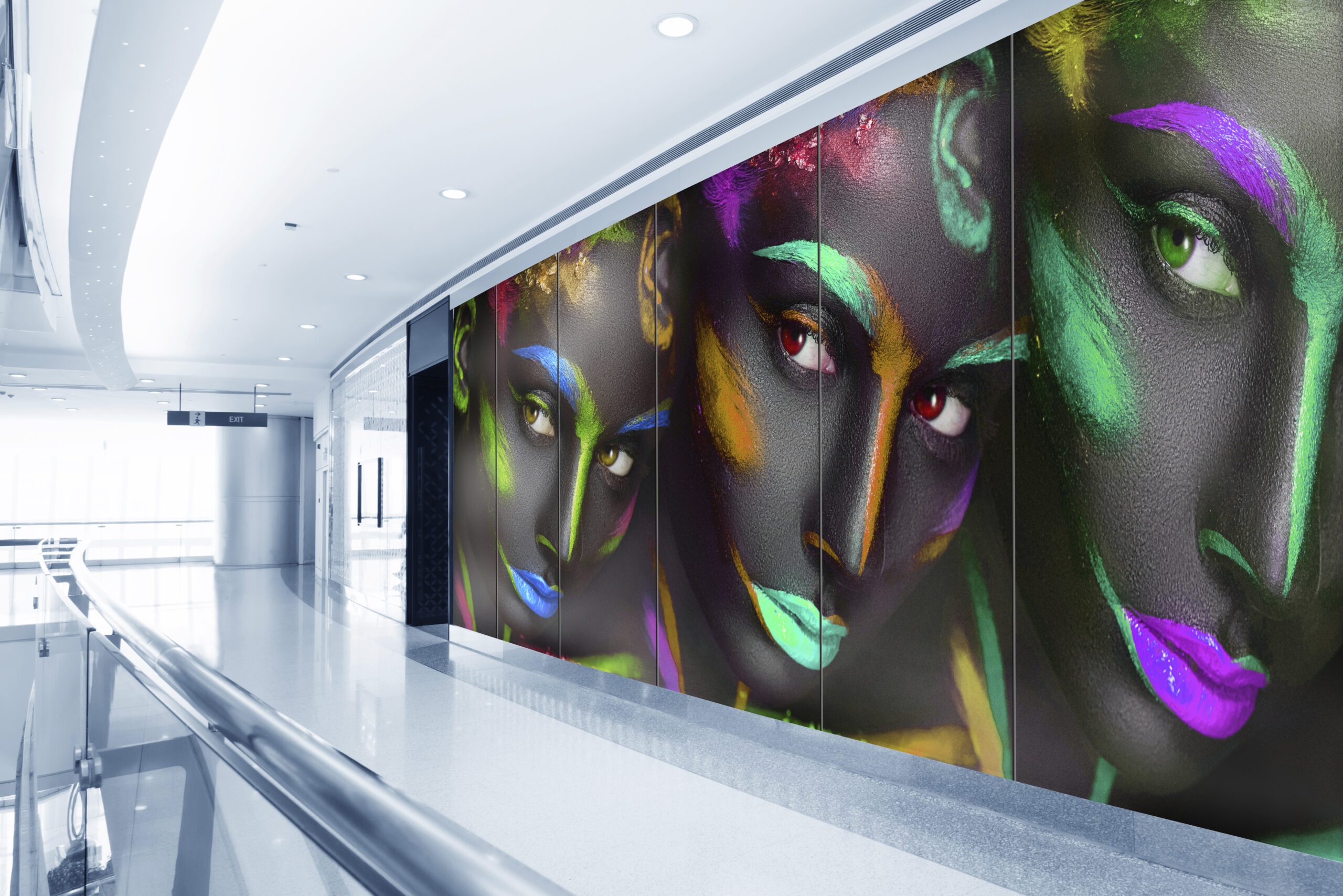 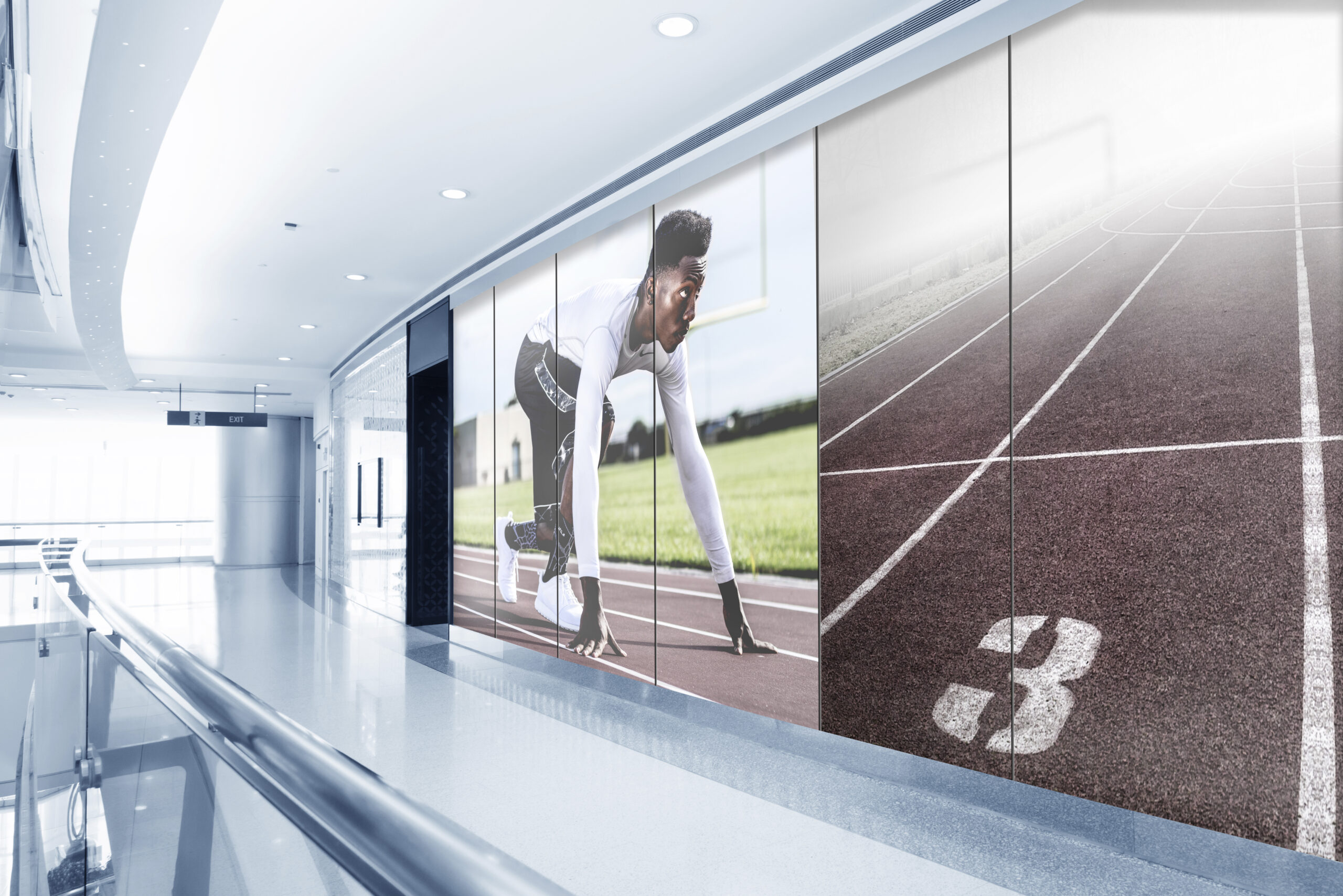 Greg Triplett, vice president of sales and marketing for Marlite, said: “It used to be that we would go on a sales call with a group of designers and throw the Marlite palette across the table. They would say, ‘This one here looks pretty good. Let us have that.’ They would actually pick one of those 35 finishes. Now that never happens. Now they tell us the exact color and pattern that they want, and it’s up us to meet those requirements.”

Out with the old

With annual sales of approximately $70 million, Marlite of Dover, Ohio, is one of the largest manufacturers of pre-engineered and pre-finished panels in the United States. Marlite’s former rotogravure finishing process, commissioned during the 1950s, played a huge role in helping the company establish its leadership position. In recent years, however, as the aging rotogravure line became increasingly prone to mechanical failure and proved inflexible to supporting customer demands, it became alarmingly clear that a technological overhaul was in order.

“The first components of the old line were installed during the Eisenhower administration,” Triplett said. “It was not dependable. It was difficult to get parts. The amount of energy required to fire up the ovens was a problem. And these were just the internal issues. It certainly was not environmentally friendly. We were using a lot of solvents. And from a market perspective, it was a very dated process. The finishing quality was inferior, especially when you compare it to the progress you’ve seen with high pressure laminate, thermally fused laminate and things like that.

“Another issue was the print quantity,” Triplett continued. “For every finish we offered, whether it was a woodgrain or an abstract print, we had to have these giant copper cylinders engraved with that particular pattern and a rubber transfer roll. The investment for any new finish was about $20,000 to $25,000. Therefore, the quantity of our palette was limited to about 30 to 40 finishes.

“Finally, there was the changeover. It took so long that we could only run one or possibly two finishes a day. We had to inventory a tremendous amount of paint,” Triplett said. “Our employees were literally on their hands and knees after every shift cleaning up paint.” 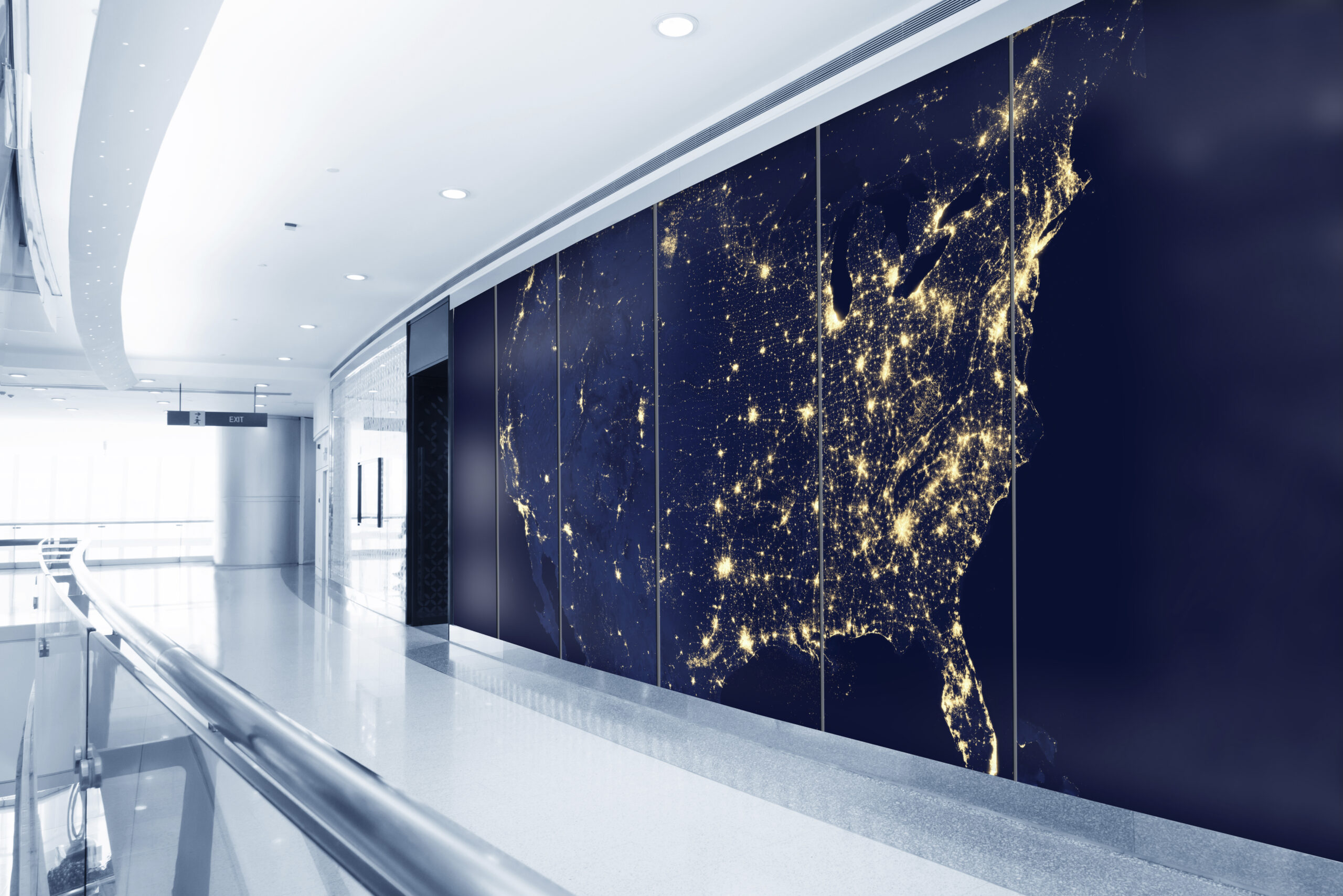 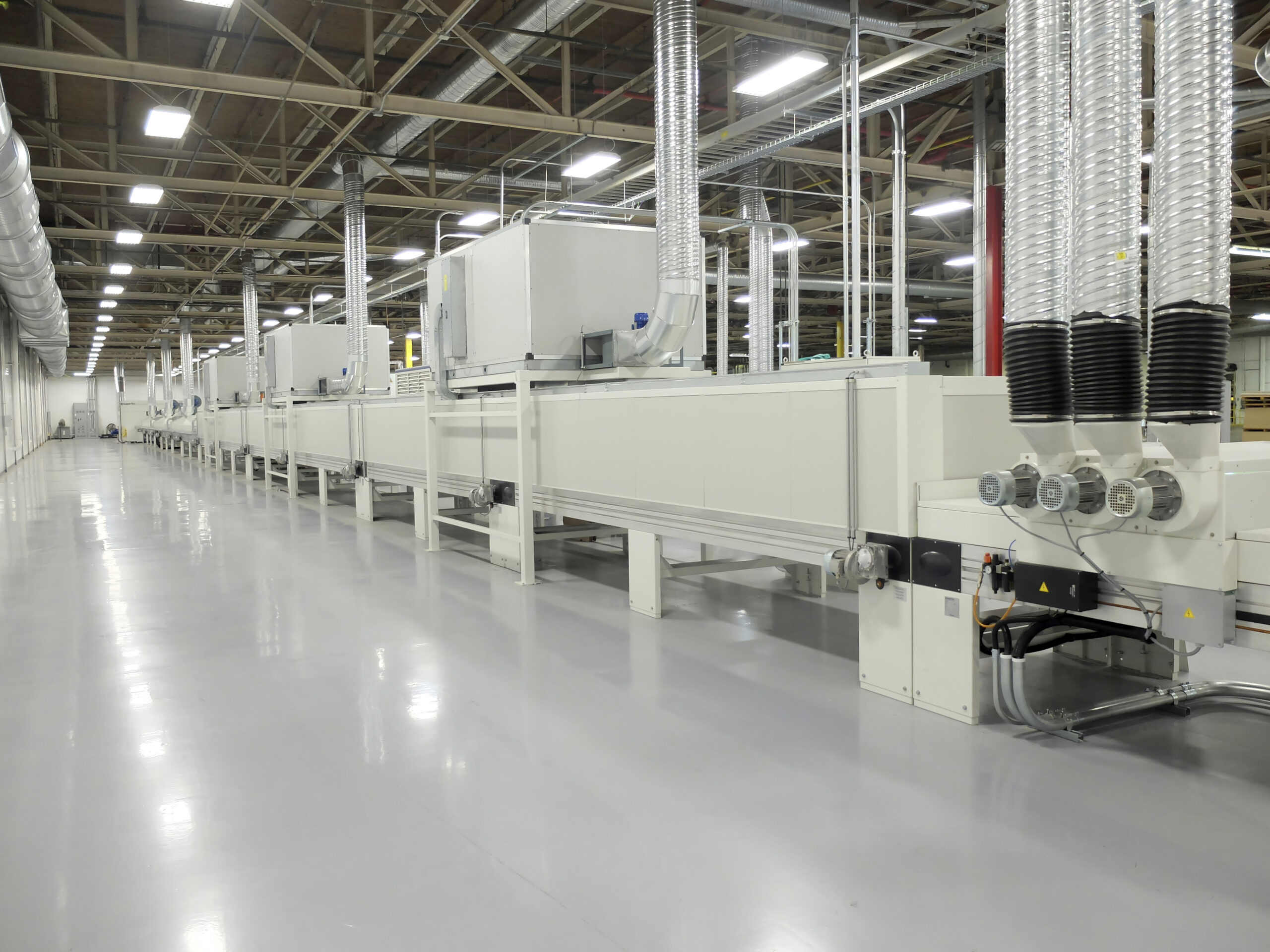 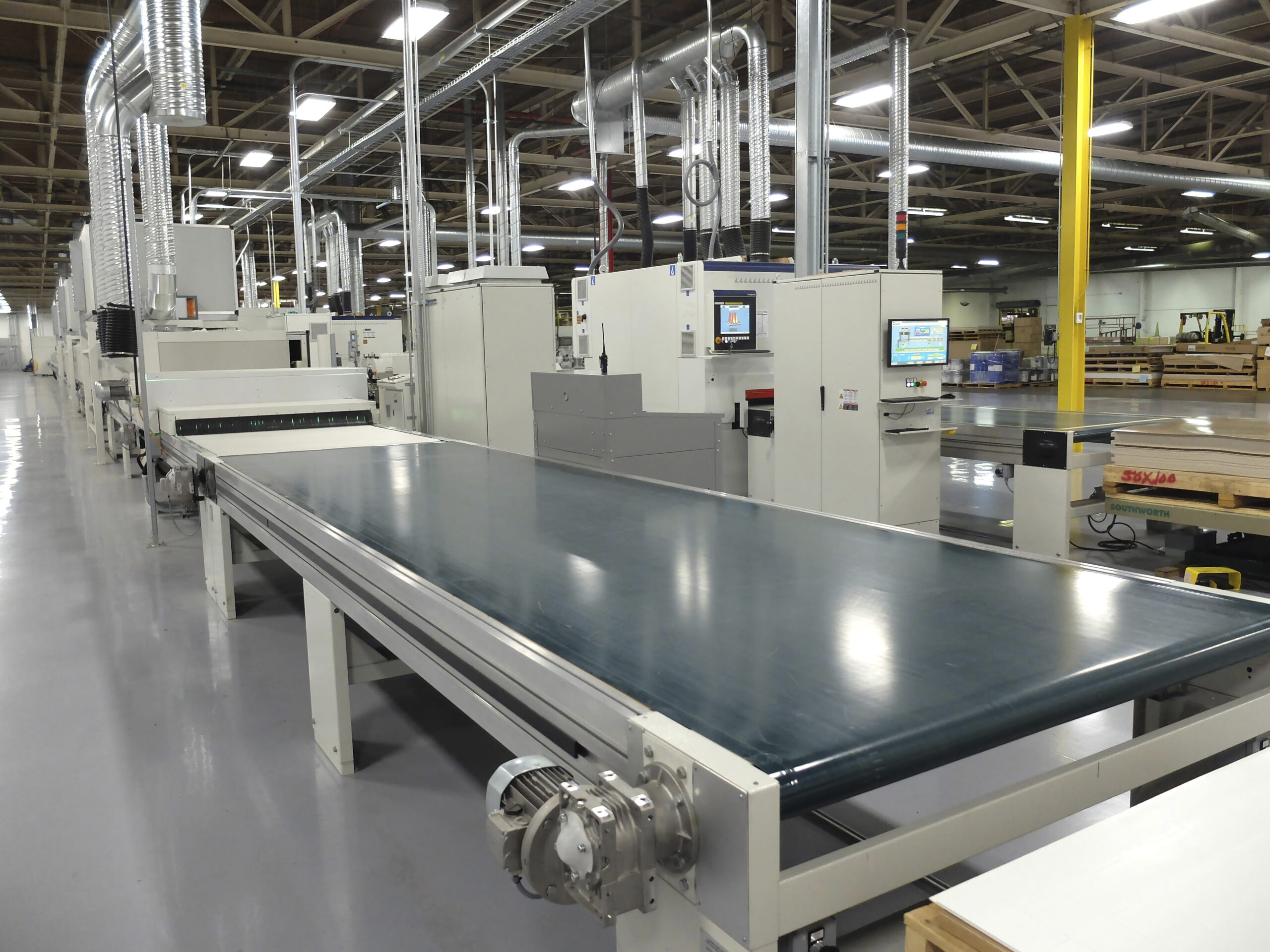 “The team developed the attributes we wanted the new line to have and connected with three potential manufacturers. The project became how to create a finishing line whereby we can print on a variety of substrates, do it at high speeds with minimal changeover, offer a virtually unlimited palette, and apply durable topcoats over these finishes or prints. 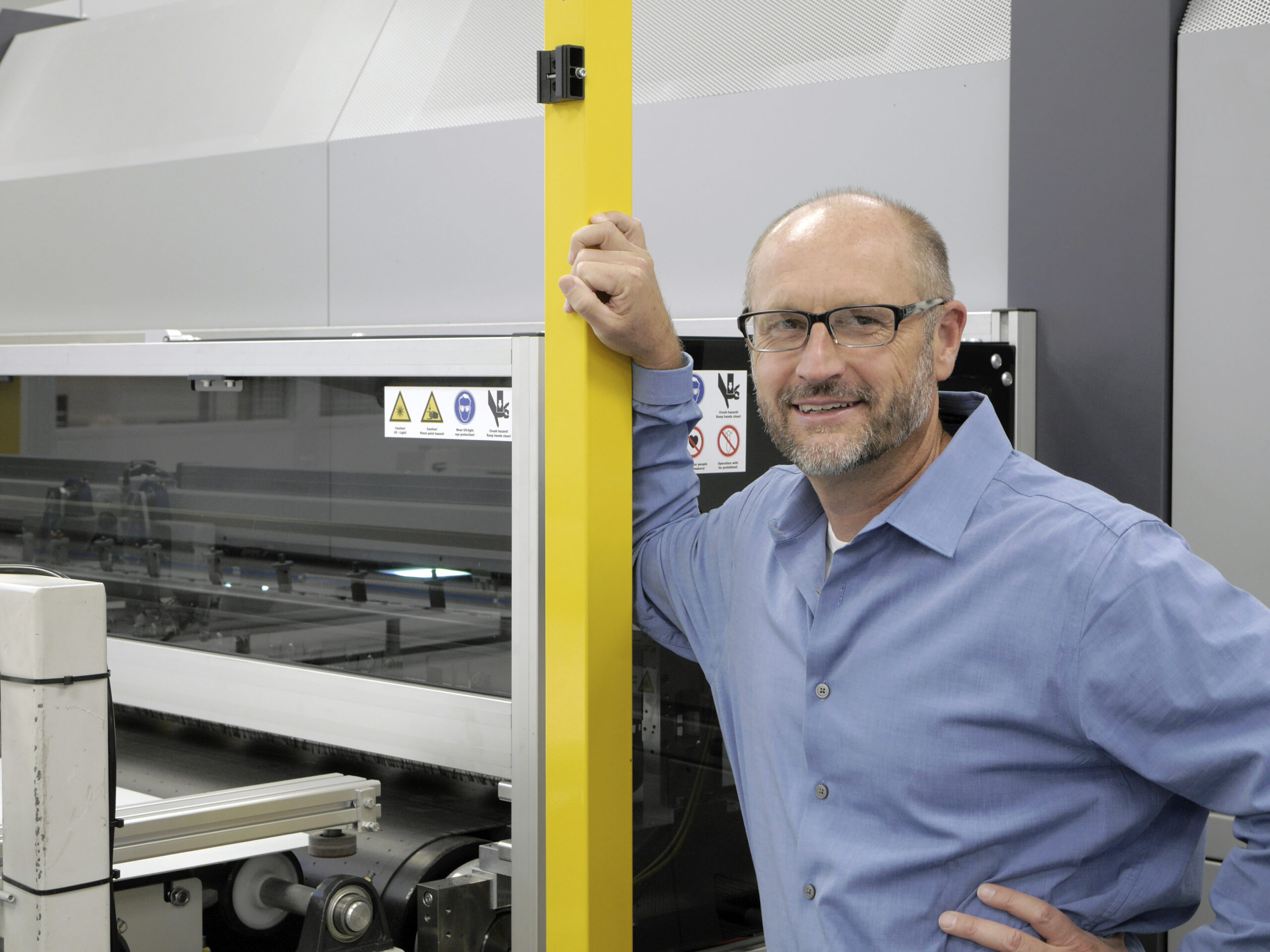 “What complicated all of that,” Triplett added, “was we were sold twice within the same year. It became a front burner/back burner type of project. I’m sure the equipment manufacturers were frustrated with us. They probably thought it would never happen.”

Indeed, 2015 was fraught with anxious moments for Marlite employees. The year kicked off with the company being purchased and merged with Nudo Products of Springfield, Ill. The year ended with Nudo’s assets being acquired by Grupo Verzatec of Monterey, Mexico. Bringing the acquisition full circle, Verzatec also owns Stabilit, parent company of Glasteel, Marlite’s long-time supplier of FRP sheets.

“Obviously one of the first thoughts many of us had after the acquisition by Verzatec was the possibility of our jobs being moved to Mexico,” recalled Triplett, a 25-year veteran of Marlite. “Not only did Verzatec keep the jobs here, but six months later, they committed $6.5 million to the new finishing line. They invested in us and our community. We couldn’t be more thankful.”

Marlite’s owners are guarded about divulging the manufacturers of the key finishing and digital printing equipment incorporated in the BlueSky Advanced Finishing System. But Triplett was able to provide some general information.

The 704-foot-long, U-shaped finishing system is housed in a clean room occupying about one-eighth of the 375,000-square-foot Dover facility. In addition to a high-speed digital printer, the BlueSky line includes a pair of wide-belt sanders, a panel cleaning station, a roll coater, a pair of high-capacity dual reciprocating systems each equipped with four spray guns, and multiple UV and low-temperature dryers. All of the equipment was precisely placed, sequenced and calibrated to work in harmony. The goal is to cure basecoats, topcoats and sealers without over-cooking the substrate or adding to the destruction of the Earth’s ozone layer through the release of VOC emissions.

“All of the Sherwin-Williams coatings are water-based and like the inks are UV-curable,” Triplett said. “One of the key reasons why the line is more than two football fields long is that to obtain enhanced durability, you have to cure panels at a lower temperature for a longer period of time. We don’t want to cure our finishes at a temperature greater than 120 degrees Fahrenheit. With the old line and use of solvent-based finishes, we were firing our ovens up to 300 degrees. Most substrates could not withstand temperatures that high. It could lead to panel curling and other things you don’t expect. Plus, the energy savings alone is substantial.”

The one-pass BlueSky system line runs about 32 feet per minute, which Triplett noted “is a bit slower” than the old rotogravure line. He hastened to add: “The savings is in changeover. This new line doesn’t care what it’s printing on or applying a finish to. Any type of changeover we have for a different substrate – how we level the sanders and adjust the oven temperature – can be done in five or 10 minutes. This line is very versatile. We can be running a solid color at one end of the line and direct feed a PVC sheet into the digital printer, and down the B-side of the line, we can be spraying a topcoat.”

Adding to the system’s flexibility, Triplett said the high-speed digital printer can simultaneously print two different images on two different panels in about 35 seconds. “We’re talking extremely high definition printing of up to 600 dpi. When we say you can put the world on a wall, we mean it.”

The image quality of the printed wall panel is largely dictated at the front end, Triplett noted. “It’s garbage in, garbage out. If the file you’re working with is crappy, then your output will be poor. Our design team uses a scanner that can go up to 800 dpi, which is really remarkable.”

How well that “remarkable” image translates to a panel is also largely dependent on the surface quality of the substrate. “What you do to prep a surface to be print ready is really critical in terms of quality and durability of the image. When you are working with digital printing, you need to build your color off a common base. That is why regardless of the substrate, we put down a white primer to start with a pristine, smooth surface to introduce to the printing process.” 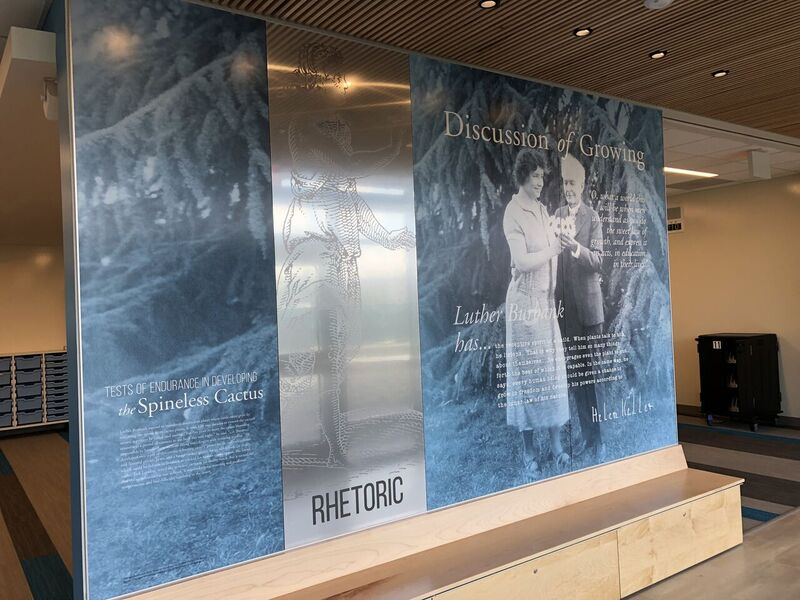 HDF from MJB Wood Group and FRP from Glasteel are the two main substrates of choice Marlite uses for its wall systems. “We have two main requirements for choosing a substrate,” Triplett said. “Number one is impact resistance. Our products go into high-traffic areas like restaurants, grocery stores, schools and hospitals. Number two is moisture resistance since our walls are subjected to regular cleaning, mop water and a variety of other solutions.

“HDF is one of our staple products because it’s got really good moisture properties compared to particleboard, and it machines really well for adding grooves and v-grooving. FRP really is kind of our niche business. We find that smooth, white FRP makes a great canvass for digital printing. We can take this non-sexy FRP sheet and make it look like brick or an exotic veneer. We can make it come to life with graphics and photographic images. We can replicate leather, marble, stone, granite–just about anything.”

Customers can test drive BlueSky by mailing Marlite a pattern to scan or uploading a photo or scanned image to Marlite’s website and requesting a sample in HDF, MDF, FRP, acrylic or PVC. “I always say we don’t get a sale until we get a sample in someone’s hands for approval,” Triplett said. “So we have a really nifty process whereby you can order a custom sample and within a few days have the particular image or solid color you want on your substrate of choice.” 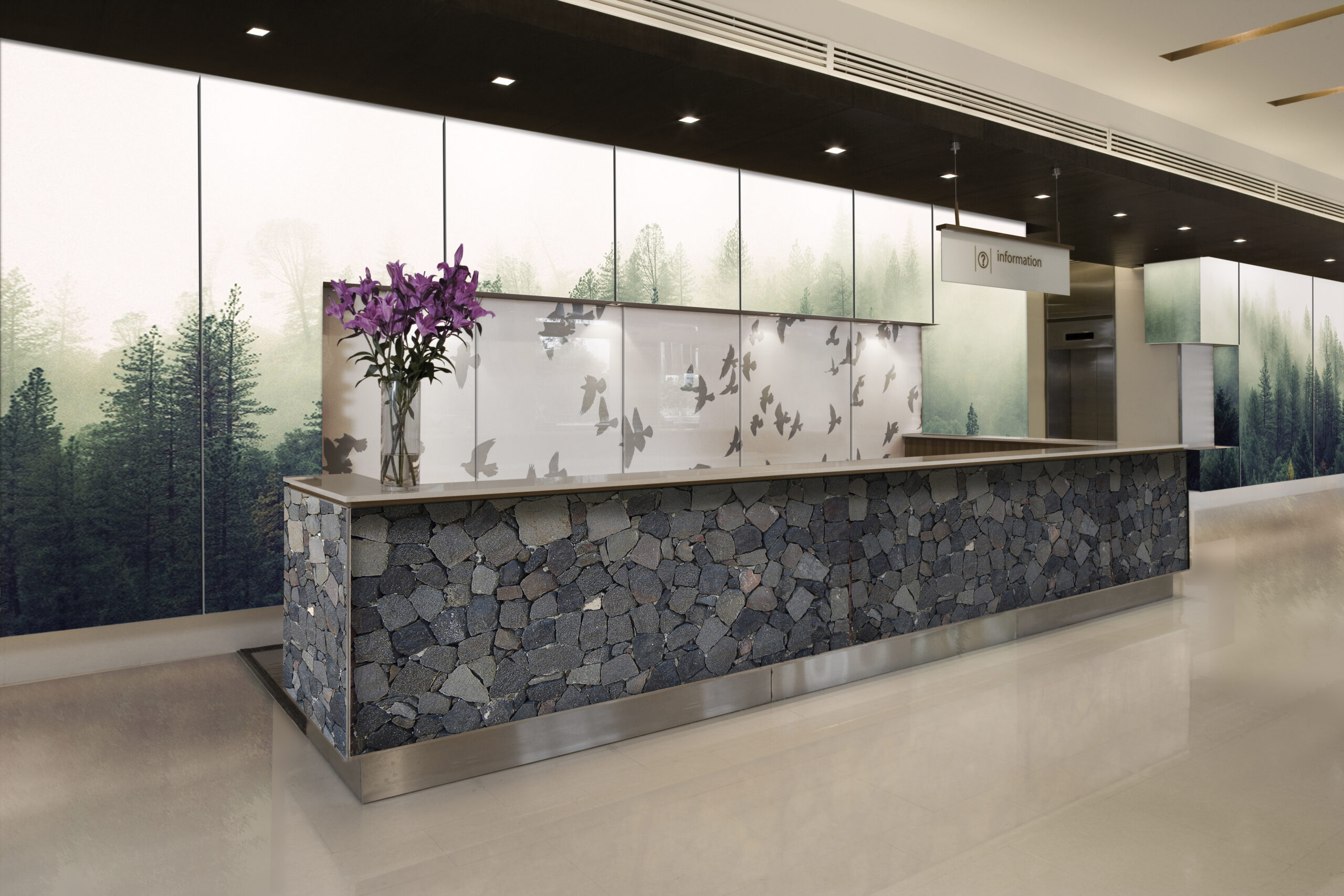 While the current focus is on servicing current and new wall system clients, Triplett said BlueSky also opens
opportunities for Marlite to break into new markets such as kitchen cabinetry, furniture and other products. 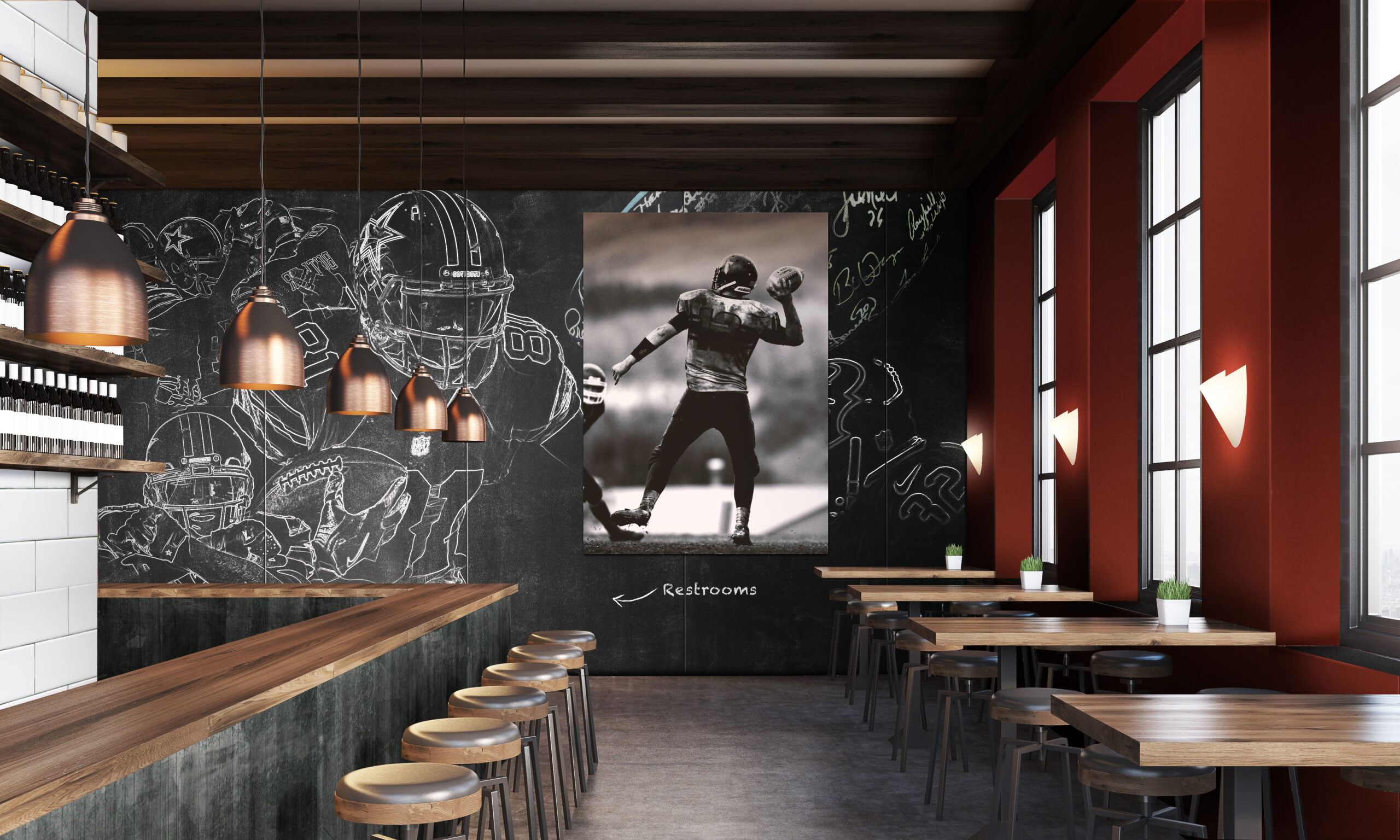 “We do not know the OEM market. We’re basically being introduced to it for the first time,” Triplett said. “If you are using high pressure laminates, we can be a lower price point, but we don’t carry the same durability as HPL. With walls, we don’t need Taber abrasion because it’s kind of irrelevant. On the cheaper side, we’re competing with foils and papers. Our sweet spot appears to be the customization, the lower minimums and the dynamics of the print itself.

“I think the key element to our future success is understanding who we are and what we want to be,” Triplett said. “We are a panel manufacturer, and we want to be among the best in the world doing that. All of our enhanced design flexibility with speed combined with our value-added machining capabilities are our value proposition. We have no minimum requirements; we have great capacity, and we’re versatile. At the same time, we’re seeing that we sort of have to create the market for it. I think the real challenge is getting people to understand that custom doesn’t have to be scary. Custom doesn’t have to mean higher prices and longer lead times.

“We’re really in our infancy of figuring out where our product fits into other markets. But I know that we have something unique to offer. What makes it really exciting is that our biggest customer is probably out there, and we don’t even know who they are.”