Automated finishing technology offers consistency, transfer efficiency and increased production – with the added benefit of a cleaner finishing environment. It is a significant investment. For Four Woods Laminating, an Amish-owned family business, the move to automation was a carefully planned process with far-reaching benefits. “Our number one priority is to take care of our customers. To give them good product and service,” says Maynard Yoder, eldest son and general manager of Four Woods Laminating. “And for our employees to have a good environment to work in.” 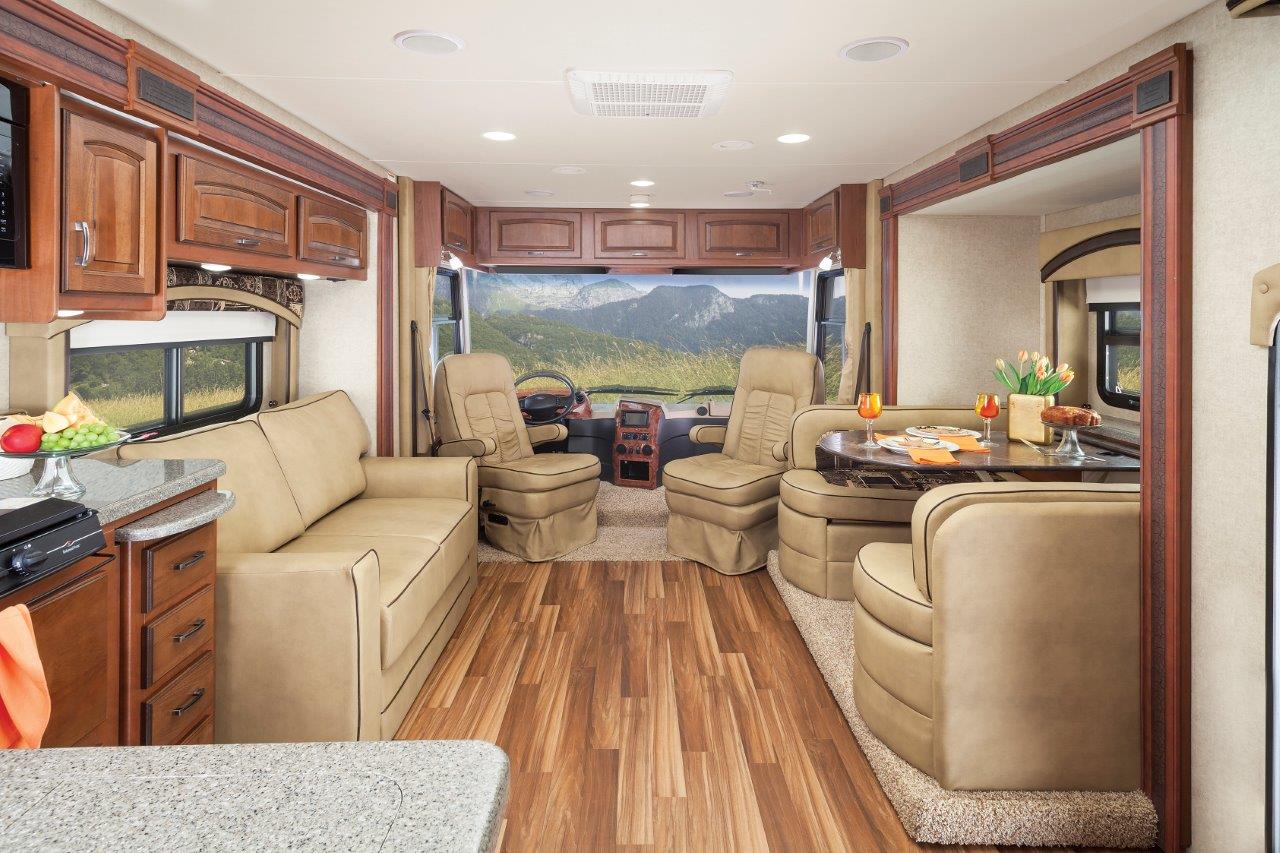 Four Woods Laminating is located in Topeka, IN, a small town in close proximity to some of the largest recreational vehicle manufacturers in the United States. Patriarch Glen Yoder started the endeavor in 1985 when the manufacturer he was working for needed a supplier for hardwood door and drawer fronts.

The RV industry is both a thriving and notoriously demanding market segment defined by high quotas, speed to market and quality standards. According to a new forecast by RV industry analyst Dr. Richard Curtin, RV shipments are expected to rise for a sixth consecutive year in 2015, with wholesale production forecasted to reach 360,100 units. This marks a gain of 3.1 percent over the projected 2014 total and the industry’s highest total since 2006. “The RV marketplace has confirmed the perfect match between the continuous innovative process used by RV manufacturers and suppliers, and the enduring appeal of the RV lifestyle among consumers,” Curtin said.

The RV industry is also a good match with the traditionally strong work ethic of the Amish. Four Woods Laminating begins work in the small hours of the morning and ends when the quota is met, regardless of how long it takes. Afterward, many of Four Wood’s Amish employees return to their homesteads to care for their crops and animals.

Fueled by a working community dedicated to quality, Four Woods Laminating grew from a small shop adjacent to the family farm into one of the RV industry’s leading cabinet door suppliers, employing 120 community members and occupying three buildings totaling 55,000 square feet of space. Four Woods Laminating made careful investments over several years to keep up with the ever-increasing demand for excellent product and fast fulfillment. The resulting automated finishing operations are state-of-the-art. “The stain line was the bottleneck of our business, so we decided to look into automated machinery,” says Maynard Yoder. “We started three years ago with two automated stain lines, and just recently added two topcoat machines. We’ve gained probably 25 percent more production, going from 20,000 doors and drawers a week to 25,000.”

“Any time you bring in new automated technology there are elements of calibration and learning,” says Bryan Copsey, sales manager for Four Woods Laminating. “It is always a collaborative effort between materials supplier, equipment suppler, and the company itself to perfect the system and make it be efficient and consistent.”

The initial step toward automation was simply power. “Up until a few years ago there was no electricity through the plant. Everything was run by hydraulics. Therefore a decision like that couldn’t be made,” says Copsey. “But Four Woods is conducting business on a pretty grand scale and it provides a lot of benefit to the community. Automation made sense. So the decision was made to bring electricity to the facility. Now the plant runs power from two Volvo diesel generators.”

Next came the machines and materials. Over a three-year period, the Yoders partnered with Stiles Machinery and CCI-Finish Works to design systems for both stain and topcoat. “Anytime Stiles is involved with a coatings application, we work very closely with the coatings supplier,” says Tom Pluchar, district sales manager for Stiles Machinery, Inc. “The two of us have to know what each others’ needs are in order to develop the best solutions for our customer.”

The first investment in automation was the acquisition of a pair of Makor Kronos reciprocating spray machines that were put to work in a dual stain line. “The technology is very user friendly. It has a simple touch screen interface with control panels that are easy to read. They enjoy the ease of use,” says Pluchar. “There are programs available that allow them to repeat different jobs. Once the program and coating is selected, all that’s left is loading the machine.” 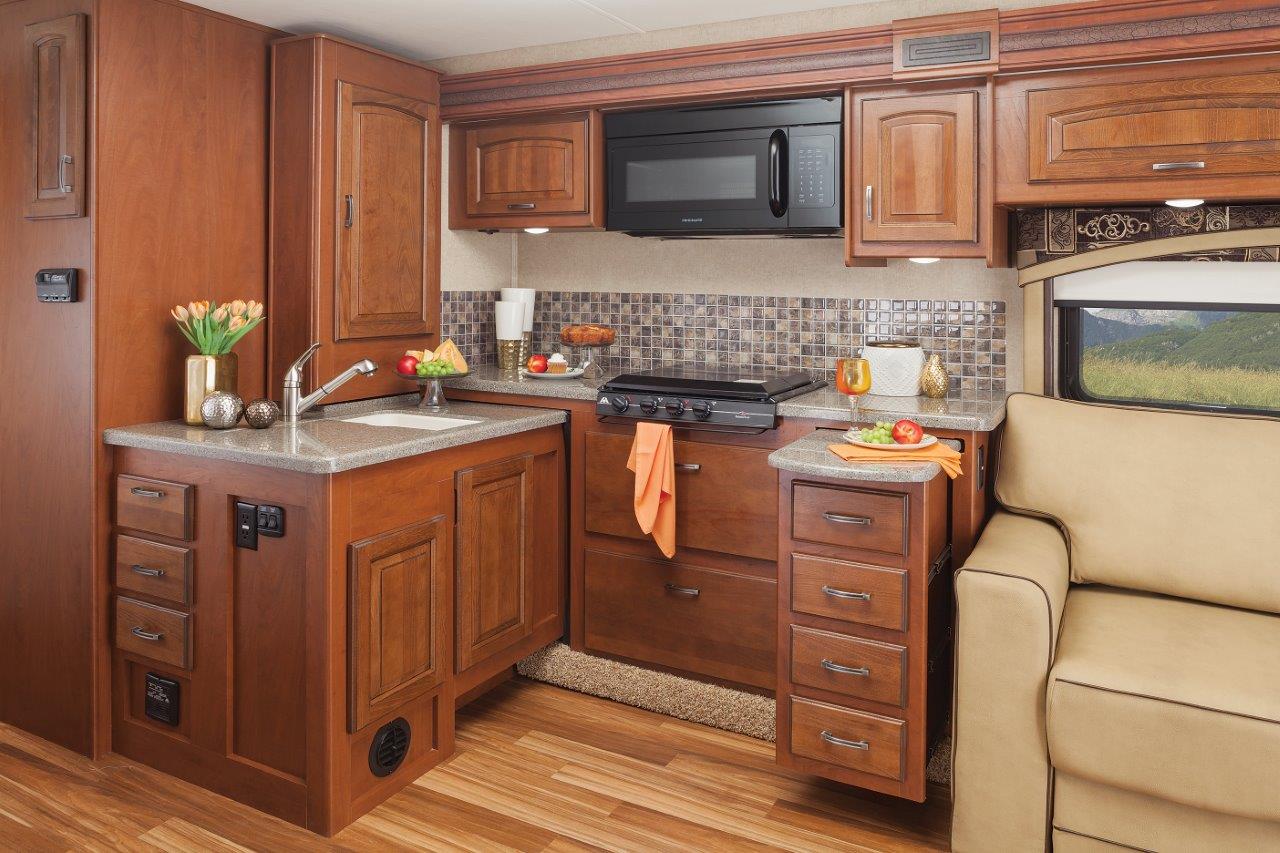 The reciprocating spray machines are equipped with a front light bar that reads the part and optimizes the spray pattern based on its geometry. It also provides feedback on filter status and spray booth pressure. “That is important for the atomized spray pattern,” says Pluchar. “If the pressures vary or the booth is drafting in and out, the atoms will waver as well, affecting the quality of the finish.”

Finish quality is of the utmost importance to the RV manufacturers, so it was crucial to maintain consistency through the transition from hand spraying to automated finishing. “We had to make sure that we did not alarm Four Woods’ customer-base,” says Paul Carr, director of branch program development for CCI-Finish Works. “So we needed to maintain, as close as possible, the established look while implementing the new materials and processes. Aesthetically, parts coming off a flat-line look a little different than parts that are manually sprayed. On that frontier, we faced a lot of challenges with formulation and application.” 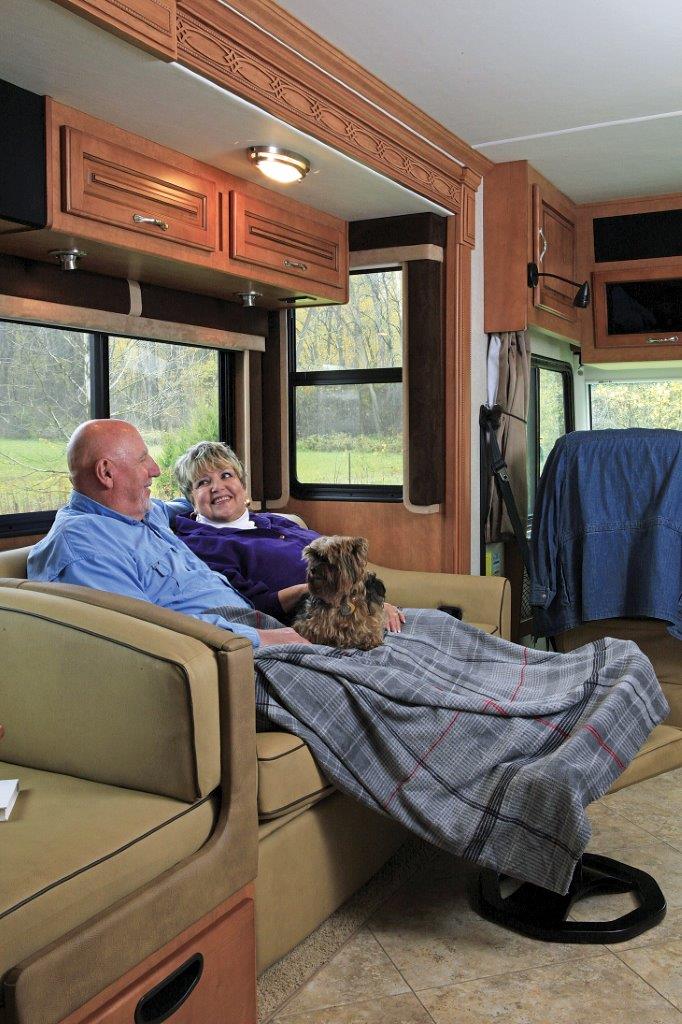 To ensure a seamless transition, Carr and Yoder (along with a chemist from CCI-Finish Works) traveled to Stiles’ finishing lab in High Point, N.C. where they developed a mastery of Four Woods’ stain colors prior to the installation of the stain line. “We developed some new technology that we felt would be better suited for the flat-line application,” says Carr. “Then the actual formulation is done at our plant in North Carolina.” Four Woods uses a proprietary solvent-based, post-catalyzed product that is mixed by hand and agitated by machine.

With the automated stain lines up and running, Four Woods’ production increased, as did its consistency and speed to market. There were other benefits as well. “The environmental people definitely like us using the stain machines. It is more environmentally friendly because it filters product before it goes out the stack,” says Yoder. “Then there is the transfer efficiency of our material. There is not much overspray on the product. It is a much cleaner process.” In fact, the automated stain line was so successful so quickly after implementation that Four Woods again turned to their equipment and materials partners to discuss adding more automation.

Following a second trip to Stiles’ finishing lab, Four Woods made the decision to automate their clear-coat sealer and topcoat operations with two additional Makor Kronos reciprocating spray machines. The biggest challenge was working the equipment into the available square footage of the plant. “We did AutoCAD layouts of the facility because flat-line requires a substantial length of line,” says Carr. “There is the flash tunnel, the UV cure station, the IR ovens. It creates a very long line. And in order to make a turn at the end of the line and accommodate larger parts, you need large radiuses. They did not have the square footage to add two more lines into a continuous flow.”

The solution was to install the twin topcoat spray lines in a Siamese set up: one inputs west and runs east, the other inputs east and runs west. “Separating the stain lines from the topcoat lines is actually a growing trend. The advantage is that you can change the colors independent from your topcoat production,” says Pluchar. “One small challenge to the layout is that it creates a little more material handling and labor, but they were willing to balance that out.” A little extra labor doesn’t scare Four Woods. In fact, all sanding and spray-and-wipe glazing is still done by hand.

The Siamese set up has the added advantage of making the topcoat lines more flexible. “They run three sheen levels, with one of them being the core product that we also use as the sealer coat for everything,” says Carr. “Depending on their production orders, they can run the sealer on one line and the different topcoat sheen levels on the other, or they can set up for a large job and run on both. It allows them a lot of versatility to work through the system.”

Each time new lines were added, Stiles and CCI-Finish Works sent in their teams of service engineers to have all the equipment installed and running within a week.

The new processes increased productivity, consistency and efficiency, enabling Four Woods to stay true to its commitment to provide quality products and service to its customers. One of the unique things about Four Woods is that the manufacturer is closely tied to the community. In that sense, the automated systems are also an investment in the people who work at Four Woods. The facility is a cleaner work environment, and as finishing is no longer a bottleneck, production schedules are more standardized. The end results of the Yoder’s investments are better products, job security and more time to devote to other aspects of community. 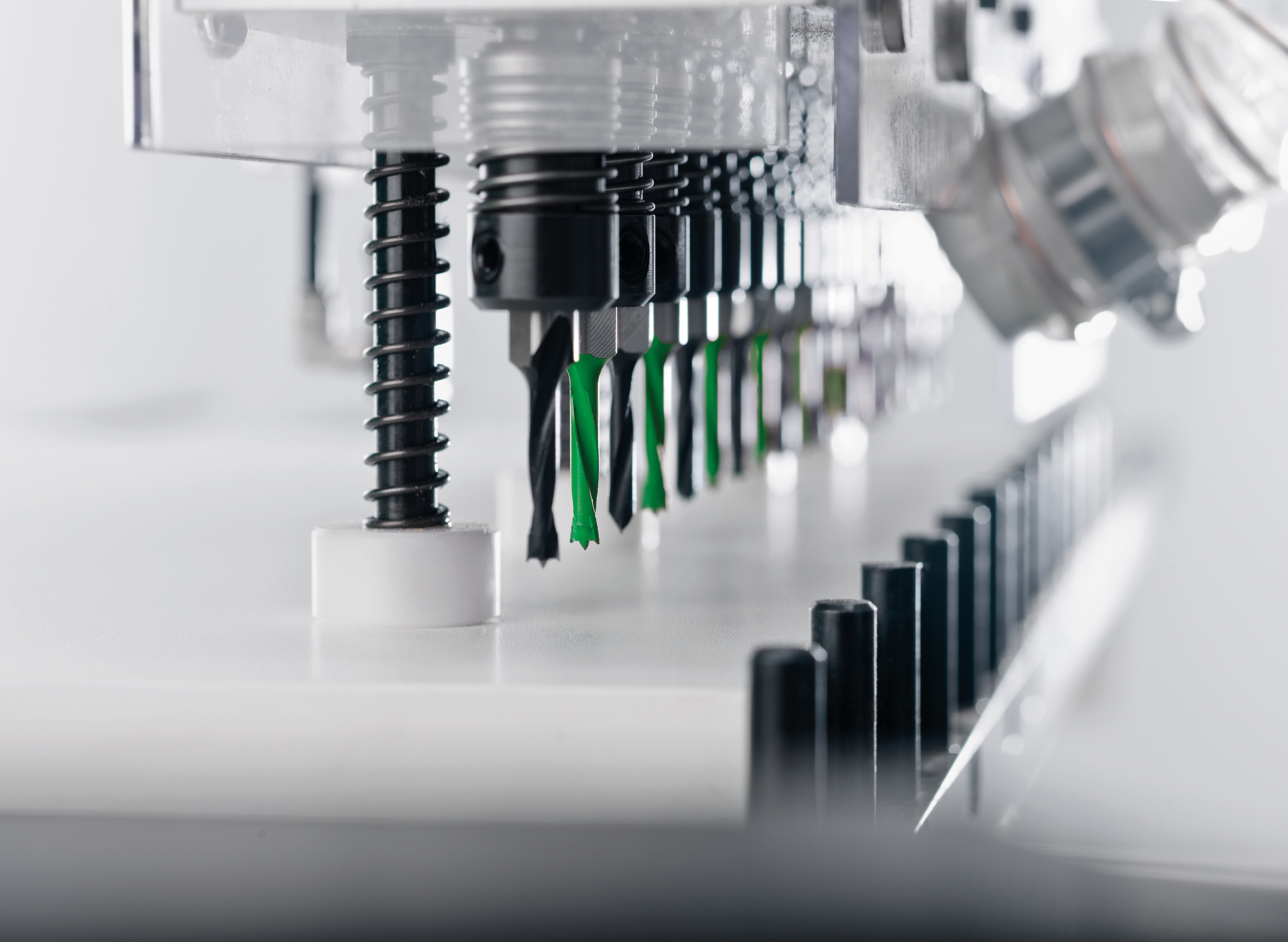 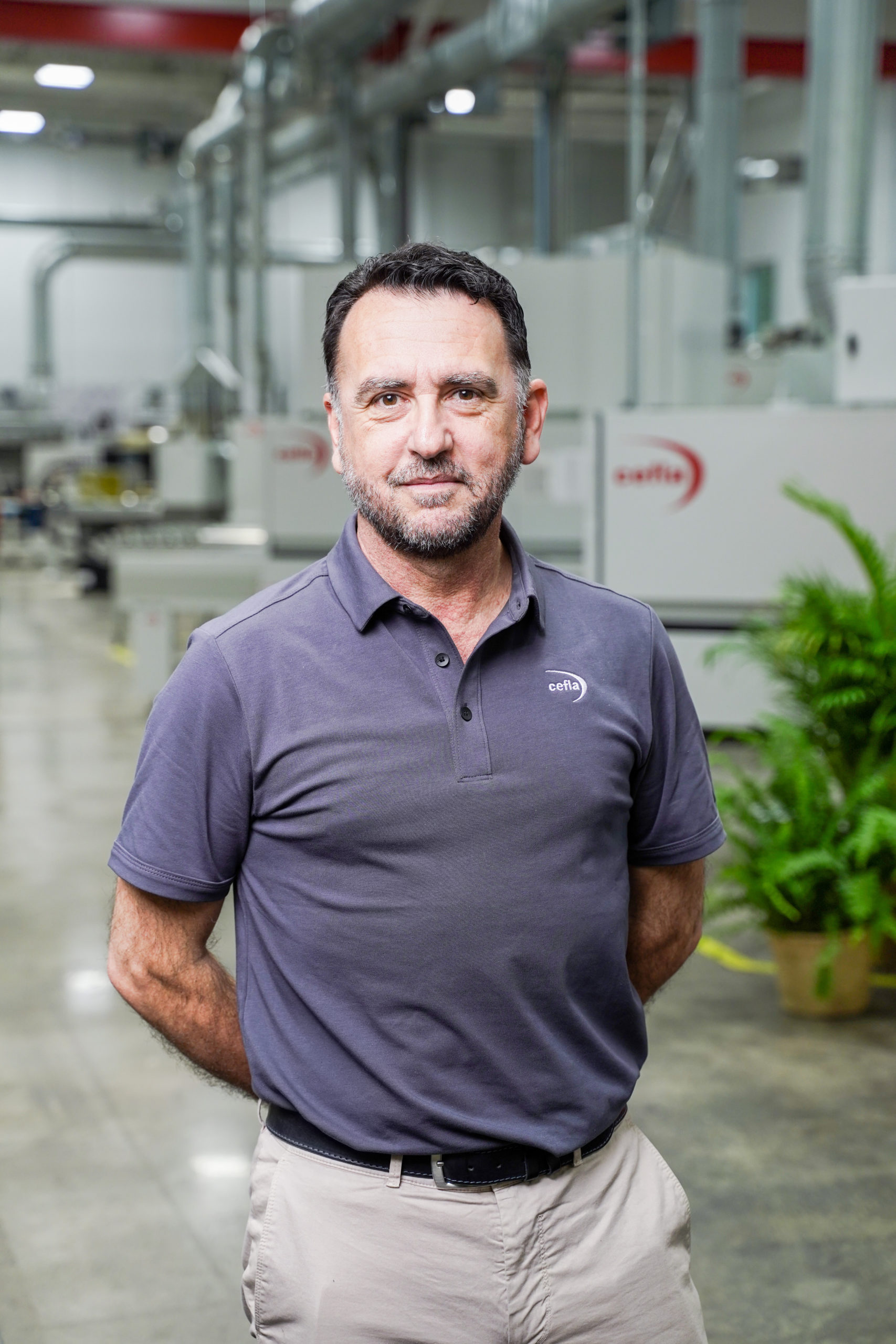