The volunteer fire department in Moffat, Texas, just outside of Temple has 20 spiffy new lockers and a renewed sense of pride, thanks to the community spirit and generosity of Maco Manufacturing and Wilsonart Engineered Surfaces.
The lockers are made of attractive and durable thermally fused laminate (TFL) and utilize coordinated edgebanding. Maco—which manufactures furniture, desks, shelving and other casework for schools and municipalities—built the lockers with donated materials from Wilsonart. Both Maco and Wilsonart are based in Temple.
Dennis Frankum, a volunteer firefighter with the Moffat department, sparked the discussion that led to the new lockers. Frankum also does maintenance work at Maco, and he liked what he saw at the plant.
“He approached me one day about how much he liked our work and how he wished they had a better solution to organize their equipment,” said Rachael Beaty, office administrator at Maco. “At the time, they were just stacking all of their equipment on plastic chairs.”
Frankum had a general idea of what the department needed, and he gave Beaty drawings that showed what he thought would work best.
There was only one catch: The department is all volunteer and has limited resources for large projects.
Maco had recently begun using Wilsonart’s thermally fused laminate, and it was a big seller, so Beaty reached out to Wilsonart’s Coordinated Surfaces Sales Manager Steve Hubbard to see if the company could provide TFL for the lockers. With plenty of material in stock at Wilsonart’s new Oxford, Mississippi, plant, Hubbard secured the OK to donate the materials.
Beaty had Frankum poll the firefighters on which colors and finishes they liked best. She sent the favorites to Hubbard, and he indicated which ones were available for donation. The final choices were Slate Gray with a matte finish for the shelves and Florence Walnut with a fine velvet texture finish for the locker walls and backs.
Beaty sent Maco’s contract draftsman a few sketches, and he made a digital model of what the lockers would look like. In early January, Maco volunteers built the lockers and installed them at the fire department.
Moffat Fire Chief Brian Falkenberg said the new lockers mean more than a way to better organize equipment.
“Speaking as the chief, I would say that the lockers have brought the crew together and have given them a sense of pride,” Falkenberg said. “As a department, this is something we can all be very proud of.” 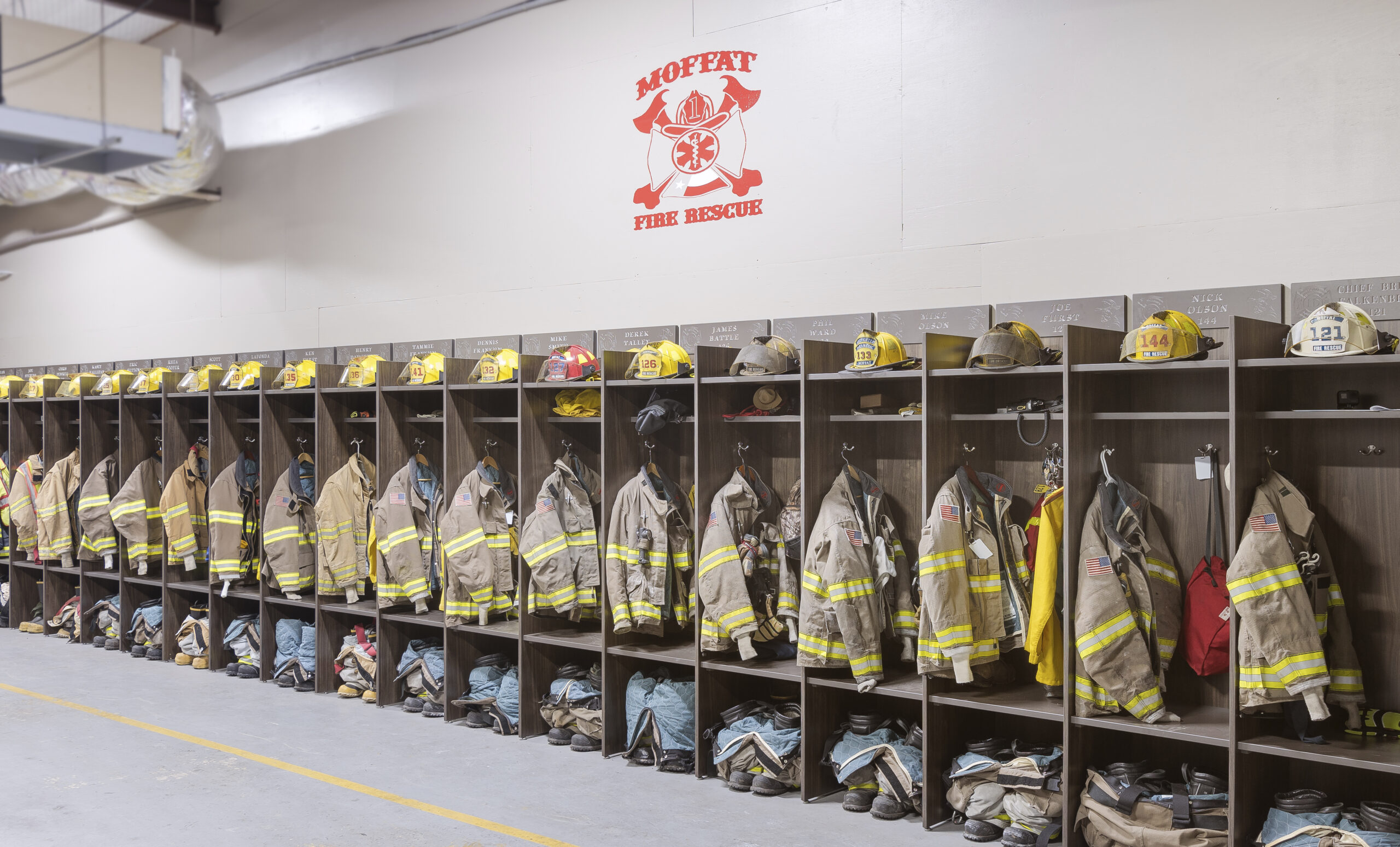 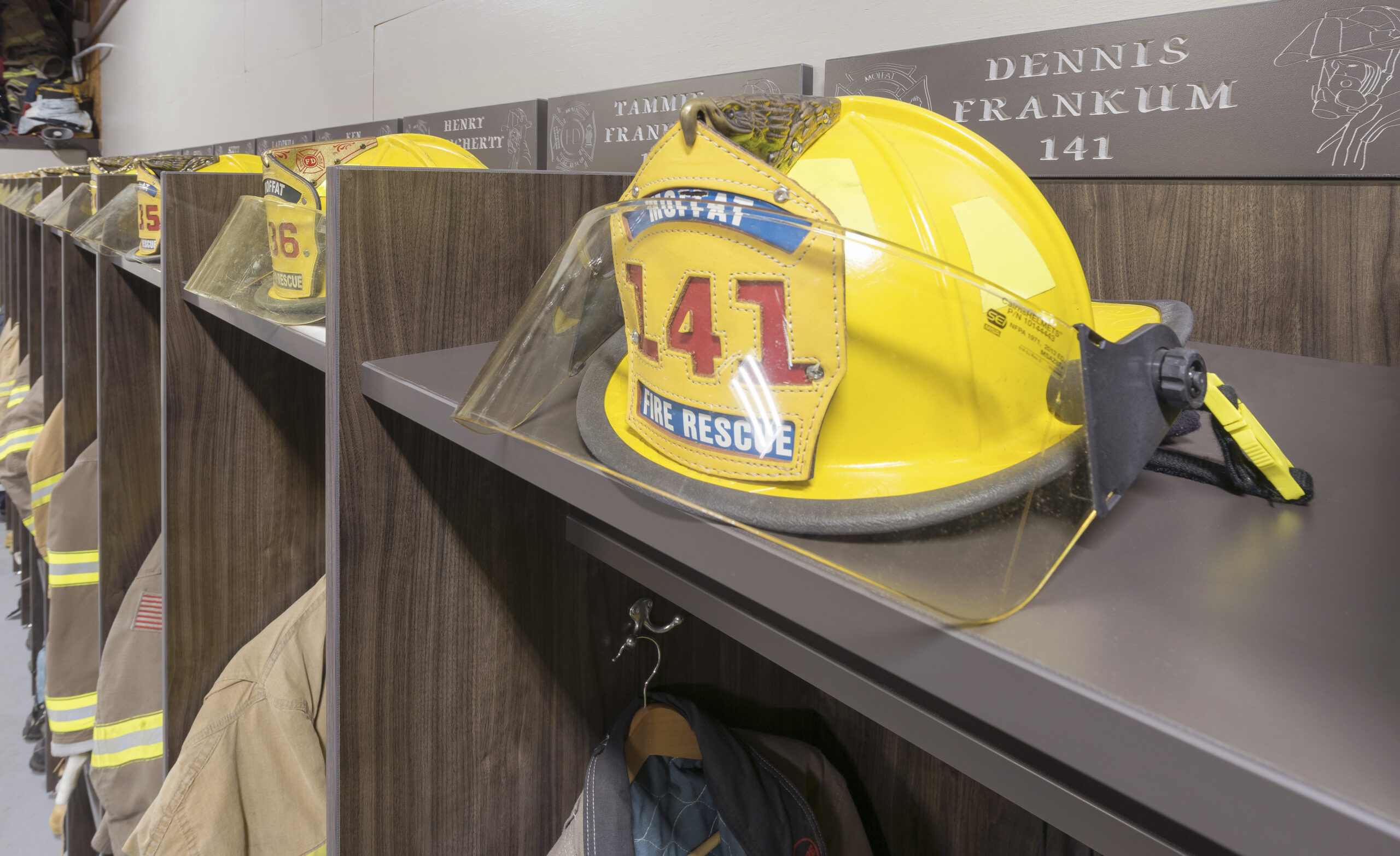 Interestingly, Maco and the Moffat Fire Department had a history even before Frankum brought them together for this project. In 2007, Maco’s manufacturing facility in Belton, where it had operated since its founding in 1973, was 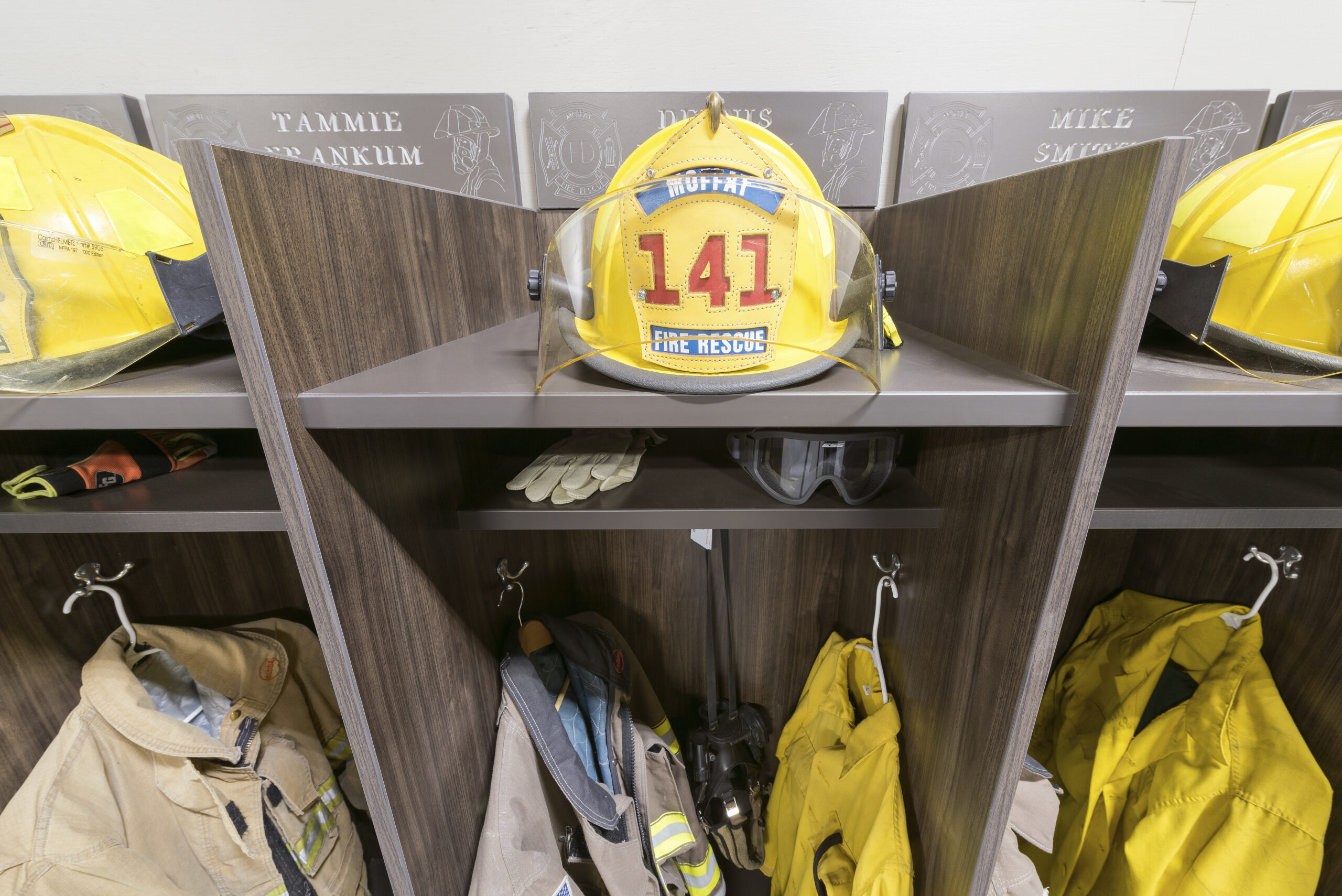 destroyed by fire. The fire was one of the biggest in Belton’s history, and 13 departments from around Bell County fought the blaze. Among them was the volunteer crew from Moffat.
In April 2008, four months after the fire, Maco found its new—and current—home in a 120,000-square- foot plant in Temple.
Maco is a big fan of Wilsonart and its materials, and at least 65 percent of its units contain Wilsonart products, Beaty said.
“We have used Wilsonart as a vendor for a long time and have been very happy with their products and customer service, which is why we have had the tendency to switch to their products when available.”
Moffat firefighters say:
Before we received our new lockers, we had no place to stage our turnout gear or personal items to keep them organized. Now, the lockers not only have a professional look, but plenty of room. Three wall hooks per cubical give plenty of room to hang gear. This allows us to suit out faster, improving our response time.
– Dennis Frankum
Our new lockers not only look more professional but have the ability to hold all the gear in a neat and orderly fashion that also allows us to organize our additional equipment in one place.
– Scott Benson
Before getting the lockers, bunker gear would get mixed up from one firefighter to the next. The new lockers brought organization and a sense of pride to the whole crew. This sense of pride has been contagious and built teamwork with Moffat FD.
– Rhea Cooper